WE HAVE AN INVESTIGATOR! WOOOHOOOOO!

But here is my week!

Oh yea, and the earthquake was out in Lorca, That´s pretty far from me, but all the missionaries there are fine.

Well first off, I feel bad that my past emails since being in the field have been a little less cheerful.  But to be honest. My first 3 weeks out here were miserable.  Everything seemed to be working against me.  I won´t go into too much detail about that but last Sunday, not yesterday but a week ago, I fasted with all my heart to just be happy.  I just wanted to be my happy ol self again and to have fun.  Then last Monday as I was cleaning up my little section of our table, a letter from miss tish was sitting on top of the shelf.  I decided to read it and in this letter, she sent me a quote from abe lincoln and it said ¨Most people are just as happy as they make up their minds to be."  This hit me like a 2x4 to the face and I ´can´t exactly put it to words, but everything changed. I´m happy now. I am excited to be here.  How much I have to rejoice about! The Heavens are open and God speaks to us because we are his children!  Miss Tish´s letter to me was the answer I needed to hear and it has made all the difference.  Elder Redd and I get along great now and are becoming really good buddies.  I LOVE Málaga with all my heart and I am so sad to have to leave on June 29 to a different area.

But get this, WE HAVE AN INVESTIGATOR! WOOOHOOOOO! It´s been 4 weeks of knocking on doors and we´ve got one! we taught them last Thursday and we have another meeting with them tonight! It´s funny though, we were so excited to have someone let us into their house and teach that we forgot to invite them to church! shoot...but we´ll make sure we do that today!  Her name is veronica and she and her family is from Argentina.  About 90 % of all the baptisms in Spain are from South Americans.  People from Spain are way too prideful.  I totally understand Westley in the Princess bride when he says he knows too many Spaniards.

Because I´ve been knocking on doors for 4 weeks now.  I know Spanish people.  I´ve knocked on all their doors!  I´ve met some pretty psycho people.  The other day a lady said something to us that hit me pretty hard.  We tried to give her a little pass a long card with a picture of Christ on it, but she wouldn't´t take it because she said "that´s not my Jesus" and then she showed us a picture of Christ bound in ropes with a very sad and gloomy face.  Then she said "this is my Jesus."  Her idea of who God and Christ are is completely different then ours.  We rejoice because God lives and loves us and they(the church that starts with c- and ends with -atholic) seem to be so stuck on the death of Christ and that God is an invisible force that is out to destroy us.

Every Saturday we play fútbol with members of the ward and I really think that I´ve gotten 10x better at soccer because these people are sooo good! Man, the deacons quorum alone, all 3 of them, could smoke us! But I love playing soccer with them and it is always such a blast!

The other day I was reading in 4 nefi about where the people no longer used to the term -itas, er, I guess its -ites in english.  But I love my ward.  We have a huge group of varying cultures. The bishop is Mexican, the 1st counselor is from Uruguay and the 2nd is from Spain.  We have basically every South American country represented in our ward and I just love them so much.  As I read in 4 Nefi, and I thought about the ward and how country doesn´t matter and I thought of my Patriarchal blessing. It says I will learn to love all mankind.  I definitely believe that that revelation is happening!

Well, hopefully our lesson tonight will go well with Veronica and that we can find more investigators.  I think I´m gonna live in Spain when I´m old.  At least in Malaga.  Come visit sometime. 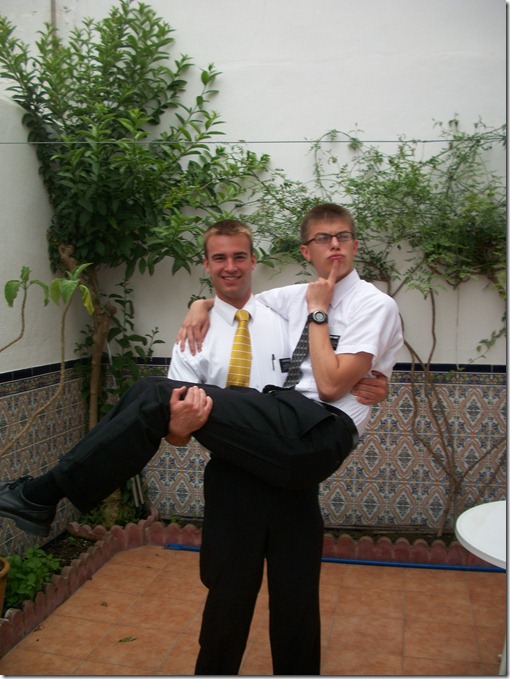 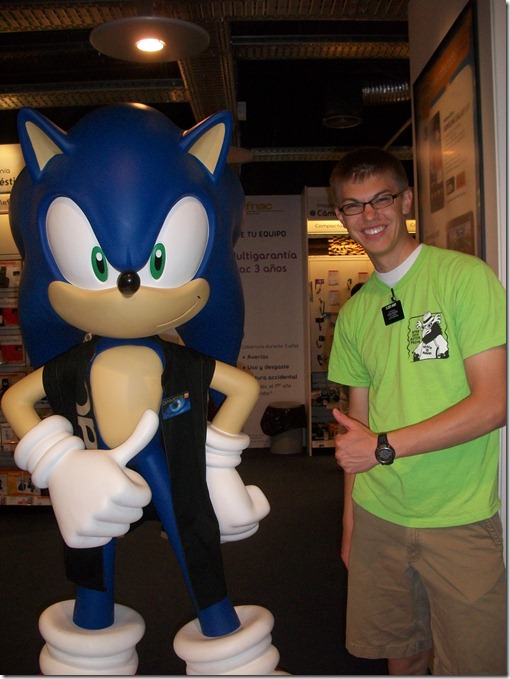 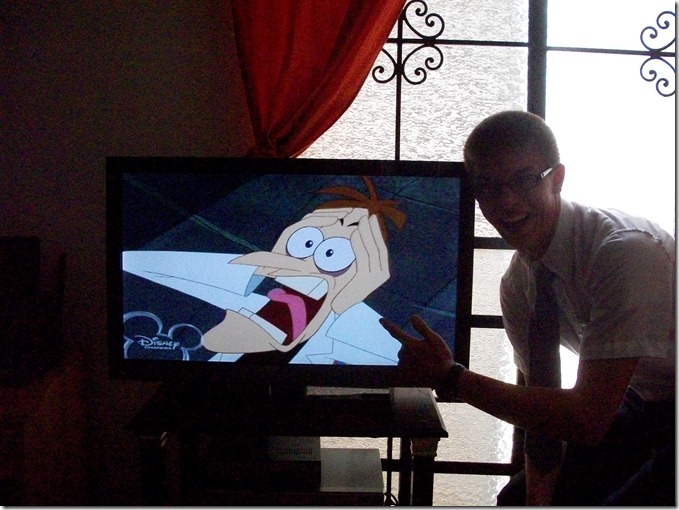 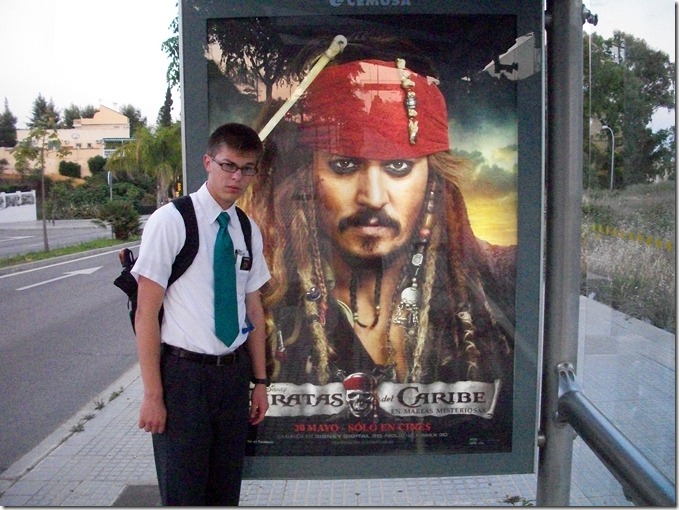 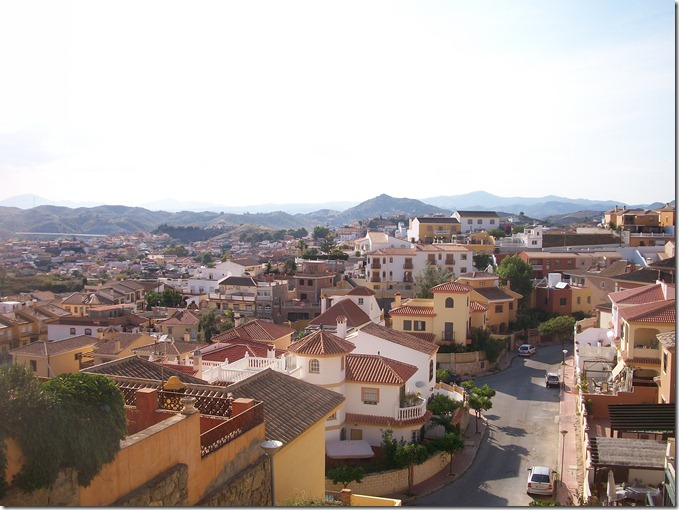 Well as for my week,

I think we knocked on over 400+ doors. We still don´t have any investigators.  But I did have a cool experience.  We were at a members house and the kids cousin was there who is not a member.  We began to talk about the restored priesthood and had a nice lesson and at the end we asked him if he would pray.  He, his name is Enrique, said he couldn´t because he didn´t know how.  Immediately I grabbed my agenda, said That´s no big deal and began writing the prayer process on a page in my agenda.  I wrote, Padre Celestial, Te Damos Gracias... Te pedimos que....en el nombre de Jesucristo, Amen. He took my agenda and read the written down process.  It was such a beautiful prayer.  I could feel the spirit so strong and it was an incredible atmosphere.  President Earl at the CCM taught us that the most important thing we can teach investigators is how to pray.  I taught Enrique how to pray, and it felt so rewarding.

Well I keep pushing along.  There still isn´t much going on for us but I´m just trying to take it day by day.

Oh yea, Conner and Curtis, if you are reading this, I finally got your letters from the mission home and I´ve already written you back!

Well my family, Another week has passed.  I have truly come much closer to the savior as we walked through the streets and people flip us off, spit at us, yell at us, and just in general mock us.  It makes me realize and understand more of Christ´s life and ministry and how much love he has for each and everyone of us.  I love you all so much and I think about you often.

Anyways, I love and miss you.
Jason

I´m here! In the mission field!

As we drove from the train station to the mission home, I had this feeling that my first area would be here in Malaga. The way they tell you where you are going, is they put you in front of the big map and they make you guess. When it was my turn, They asked where I wanted to go. I said Huelva because the Navy base is there but they said no, and that my first area is.... here in Malaga! Called it!  Well, there is a downside to it.  They re-opened an area and that is my area.  So ALL week all we have done is contacting.  We´re supposed to teach 20 lessons a week, this past week we taught 7.  Because no one in this part of the town knows who we are! Its been hard. Its been hot.

My trainer is Elder Redd from  Nampa Idaho.  He´s been out a year this week and he´s an interesting character. He´s kinda cocky and so sometimes it is difficult.  But we live in an apartment with another companionship but our little house is meant for 2 people and we´ve got 4 in there.  Every P-day we are supposed to do an entire apartment clean up but they hadn´t cleaned it in weeks so it was disgusting! Pig sty! bleh! So today I made every one help me and the "house" is 10x cleaner.  Whew, it was bad.  And I´m pretty sure we´ve got a mold problem in the house.

On my first day, we gave an investigator a blessing because she has been sick. She called us the next day and said she felt much better. I found out that we are the 12th set of missionaries that have taught her and she has been a "dry" member, she´s been going to church for the past 2 years but just doesn´t want to be baptized for some reason.

The food here is different.  In Spain, they eat one BIG meal and then munch at breakfast and dinner. But a typical meal is soup, why I don´t know because its so stinking hot outside!, salad, appetizer, main course, fruit/yogurt.  And each course is a FULL plate! And Spain is one of those places where if you don´t eat it all they think you don´t like it! ugh. We had some eggplant and cabbage soup the other day.  It was the worst.  Another meal we had some kind of potato salad but there were fish things in it.  I didn´t see the fish things and took a big bite and my gag reflex decided to kick in and it was all I could do to hold it in.  I think my gag reflex goes off every day we have lunch with a member.

I would much rather just go home for lunch then have to try to suffer down some fish soup. Ugh, I thought fish was bad, fish soup is the nectar of Satan! I´d take the raw fish before I eat it in a soup! But I´m still eating and I drink a ton of water.  So don´t worry about me!

I feel like my Spanish has gotten worse now because in the MTC they teach you proper Spanish but nobody speaks with "proper" Spanish, its all slang and they drop their ´s down here.

So we were walking to an area and a guy in a little car pulls up and starts singing a flamenco song to us, but he was saying how Mormónes weren´t welcome in Spain and that we´ll never understand "Andaluce" (the accent here in Andalucia).  he said some other mean and nasty things but we weren´t even close to being mad or upset.  The guy just sang a flamenco song to us! It was awesome! haha! There are some weird people here.

On Saturday, was the ward talent show, and they get really into it here! It went for about an hour and a half! and almost everyone in the ward performed! They wanted the missionaries to do something and the other 3 looked at me and I thought up all these great and funny ideas that were really on the spot, but the other three were lame and didn´t want to do it, so we let the ward down and didn´t do anything! Lame! 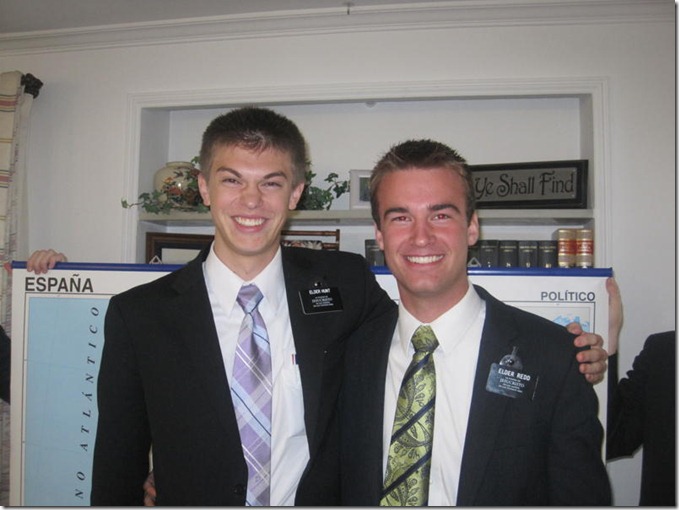 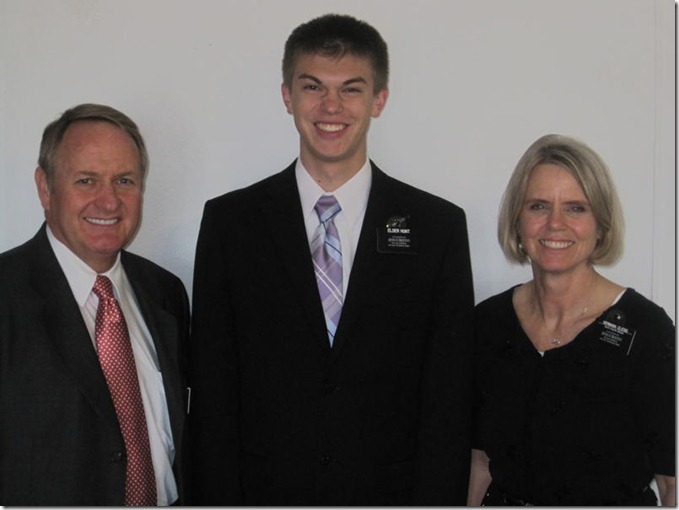