This past week was pretty rough.  We didn´t get many lessons, our investigator only came to one hour of church, none of the less actives came, and the District leaders and Zone Leaders are giving us a bunch of flak because we haven´t had any new investigators in four weeks.  On top of that.  It is hot and the soles in my shoes have melted.  We walked a ton this week and my feet have taken the beating and are just destroyed with blisters. In the Mornings, for our 30 minutes of exercise, I jog in place and do plyometrics and whatnot (it sounds a little goofy, but hey, you gotta work with what you´ve got) But lately I haven´t been able to. I can´t stand on the palms of my feet because of how blistered they are. When I get up to stand, I wince just about every time. I´m not telling you this as result of complaining or discouragement, only to build the context of an experience that really helped me personally.  Like I said, things aren´t going in our favor right now.

In one of our lessons this week, we shared a Mormon Message with a less active family. It was called "Buenas Cosas Vendrán" (Good things will come) and it is taking from a talk from Elder Holland.  In the video, towards the end, he says, with watery eyes "Don´t you quit, you keep walking, you keep trying, trust in God and in Good things to come." That statement just hit me like a ton of bricks and went strait to my heart. "You keep walking." It gave me the courage to keep going on the blistered feet and melted soles. How grateful I am for the Lord and the abundance of blessings he has given me! Good things can come, and they will! Maybe not now, maybe not in a long time, but with putting all your trust in the Lord, everything will work out. No, things aren´t working out for us right now, we are getting rejected left and right, the members get offended especially easy and go inactive, and we spend hour after hour in the 100+ Sevillian sun. But I know with all my heart that with trust in the lord, things will work out.  The truth is restored on the Earth, how much reason we have to rejoice!

I have the amazing chance to see daily miracles and see myself learn and grow. I am so grateful to be here in Alcalá. If missionary work didn´t push you to your limits, then I don´t believe it would feel rewarding at all. We all have our own personal challenges that will push us to our limits and truly test us, but I can testify without doubt that buenas cosas vendrán.

Nothing Too Crazy This Week…

Elder Barney and I are doing great. We have a good relationship and we are getting a lot of work done.  Like I´ve mentioned, we teach a ton of less actives and not gonna lie, it gets to be very frustrating.  We have taught them all many many times and they still just don´t go to church! I see clearly now how important it is that we do the small things that matter most.  As we talk with these less actives and figure out the moment they stopped going to church, it always seems to be the same moment they stopped praying, reading and going to church meetings.  I firmly believe that if you do those 3 small things, you will always live worthily before God because with reading, praying, and going to church, you will find the desire to serve and be faithful!

I can´t say that anything too crazy has happened this week.  We´ve come in contact with tons of drunks, beggars, punk youth in the street that all just have it in for us for some reason.

This past week, we went to go teach a recent convert and she lives out in the country and its about a 35 minute drive.  We got there and taught the lesson and it was fine but the thing about Spain, Spain has about 4 hours where nothing happens, from 2-6pm it is just dead here.  We finished our lesson at 1:30 and went to catch the bus, but the buses weren´t running! AH! the last one left at 1 and the next one came at 6! So there we were, out in the desert, (see previous sent pictures to view the desert that we walked through) without a bus. So we walked. It took us about an hour and a forty-five minutes to walk back.  It was so hot and dusty, but we finally made it back!  We got home, drank some water and just died on our sofas.

But all in all, it was a good week and I am so grateful to be here in Alcalá and working with the people here.

"Elder Hunt and the Allegory of the Olive Tree" 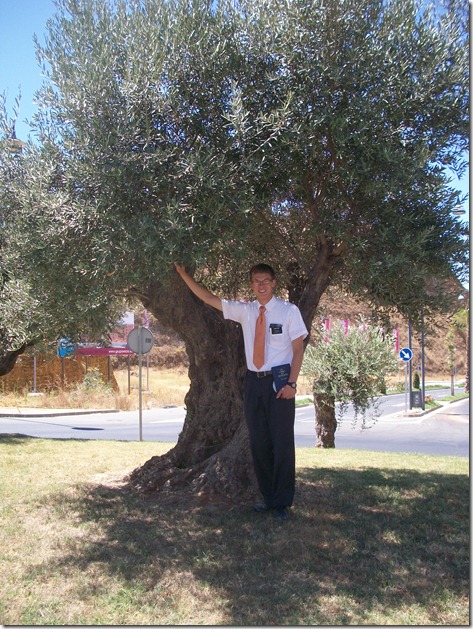 Alcalá is a pretty fun little town. It is very interesting.

The lord has blest me so abundantly on my mission.  Right when I got here, an old investigator showed up out of now where and wanted to take the lessons again.  We even set a baptismal date for him! the 13th of August!

Nothing too crazy happened for the week, I´m running short on time because we got back from visiting sevilla so late.  But what a cool city! We went to a cathedral and to the "Plaza de españa" where they filmed the naboo palace scene from star wars episode 1! way cool! 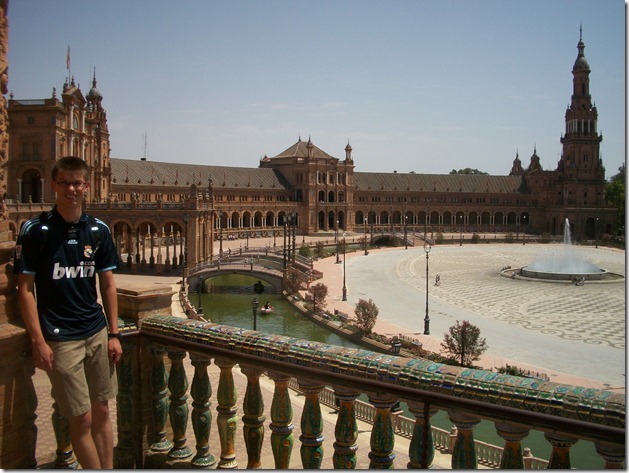 We work mostly with less actives here in alcalá because there are just a ton of them. We stay pretty busy with them. It is pretty frustrating because they just...I don´t even know, they are just inactive to be inactive. I just don´t get what their deal is.

here are some more pictures from alcalá
we had a reference for a pastor, a sheep guy, out in the middle of no where. It ended up being un-profitable. But it was cool to see the nothingness of sevilla. 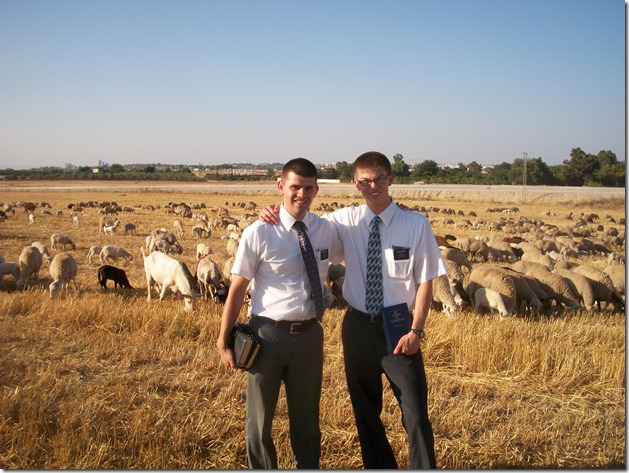 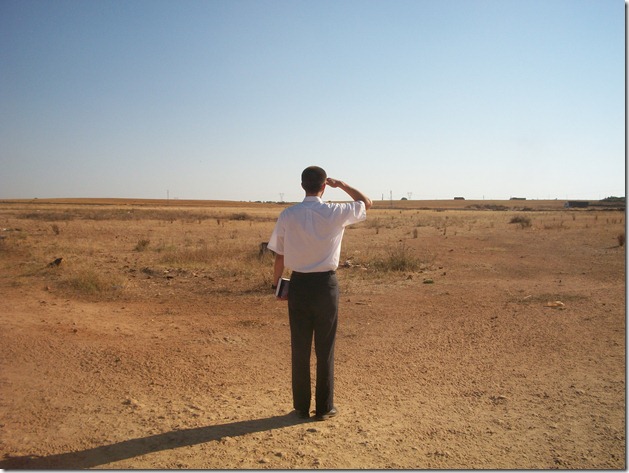 I had a few things on my mind that I had to confess to the priest, ;p 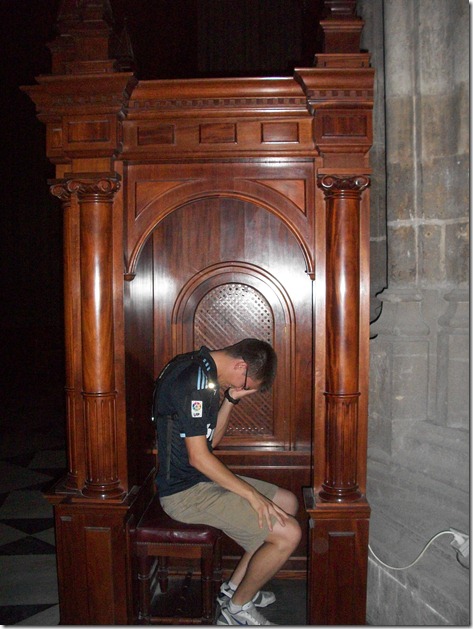 The other day, some Jehovah´s witnesses knocked on our door, your should have seen their eyes when they saw us. It was great. They immediately tried to condemn us to hell and they just keep talking about how evil we were and that the scriptures say this and this and whatnot, and after they finished their little spiel, elder barney and I asked some questions, totally stumped them and they tried to give us a book on "how to understand the teachings of the bible" but they ended up taking a restoration pamphlet from us in the end.  I have truly come to realize the power of asking good questions.  We taught a lessons where we used almost only questions to teach and it was such a powerful lesson. Good questions are just great!

I have seen my self grow in so many ways since starting my mission. I can look back and see how much I have matured in responsibility and the way I present myself.  I have learned so much about the man I want to be.  But some things, well, some things will just never change ;p (when you see the picture you´ll get it..haha) 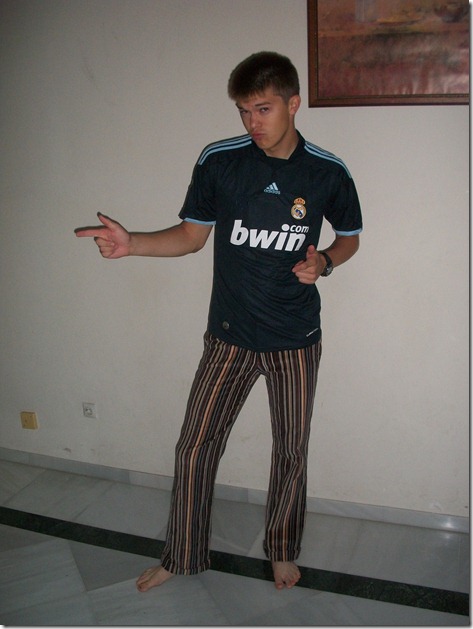 Well I love and miss you all and am so grateful for the letters!

Like I said before, I´m in the pueblo(town) of Alcalá de Gaudaíra and here is my mail address again so you can send me stuff!

On transfer day I got here and it was 113ºF. Whew.  But its only gotten hotter! Today it has been 118º and the people say that the heat is just getting started.  But on a happy note, our house is a real house! It is HUGE! we have a main level, a garage, a "backyard" an upper level, two bathrooms, and a roof that we can hang out on. But my favorite part is...AIR CONDITIONING! WOOHOO! oh its nice.  I don´t understand how anyone can live here. It is unnaturally hot.  They say last summer broke the all time heat record at 140ºF.  Isn´t that the lowest setting on an oven?

My new companion is Elder Barney from Boise, Idaho. He´s been out 7 months so we´re a pretty young companionship.

But enough of the heat! I got to meet the ward this past sunday and it is going to take a lot of work with them.  They´re a little interesting.  Also, they go through bishops like crazy because they all get offended by him or have some small issue. We have a binder with papers for about 50 less active members all because they had a disagreement with another member.  So most of the "Alcalá work" is bringing less actives back.  Today for Pday, since we have a huge house, a bunch of elders from our zone came and we had a 4th of July BBQ.  It was very fun. We also went bowling. I got a 145! I think my best game of bowling ever.

I am still getting used to the extreme heat here, I went from about 90F to 113F in one day.  But the other night I was a totally dehydrated and was completely trippin out.  When we were sleeping that night, I woke up felt my legs and noticed that I was wearing shorts.  I tripped out thinking we were at a members house for some reason.  It was pitch black (they have the reladins here) so I get up and start shouting for my companion. He was in the bed next to me and was like "what the heck is going on!?" and I shout " Where are we?!" (thinking we were in a members house) and he says "Spain!" and then I finally said "But were in our house in bed right?!" he reassured me that we were in our house and that it was bedtime.  I went back to sleep but in the morning I woke up again completely dazed and had now idea where the heck I was. It was pretty scary.  So I am drinking much more water now.

On this wonderful day of independence I reflect on what it means to be free and how grateful I am that I am American.  They aren´t free here like they are in the United States.  Sure they have laws for freedom of speech, religion, press and what not.  But Spain is enslaved by tobacco and pornogrophy.  There is a tobacco shop about every 50 feet with cigarette vending machines and just about every adveritsement for whatever type of product has a completely naked person on it.  Yes we do have our issues in the US, but not nearly as bad as it is here.  I am proud to be an American and I am so grateful for the Freedoms that we have because without them, the gospel of Jesus Christ couldn´t have been restaured back in the early 1800s.

Well not too much else is going on for me. It´s hot. We were working hard. The church is true.

I love you all and thank you so much for your love and support!